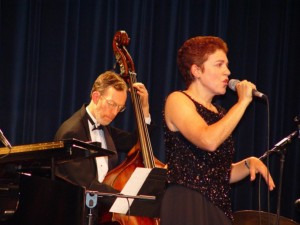 Jazz Singer to Release New Collection of Original Songs in 2012

Linda Tate is stepping back to the table with an appealing array of new material. Performing as vocalist, composer, lyricist, and arranger on Geography, she will delight you with a deeper look into her creative arsenal. Influenced by jazz, world, and Latin musical styles, she provides her own unique perspective on universal themes. Global travel has been her inspiration, and Linda infuses these songs with her heart and soul. Melody, rhythm, and wistful wordplay combine to pull you into a magnetic listening experience, and her mellow, rich voice captures you in a magical place. Her palette is evocative as she paints enchanting images on an exciting aural landscape. Featuring an impressive group of Chicago jazz talent including Ernie Adams on drums and percussion, Steve Eisen on flute and tenor saxophone, Curtis Robinson on guitars and vocals, and Marlene Rosenberg on bass, Linda continues her expressive journey and invites you to come along.

Click on the Kickstarter logo above to check out my Geography project!

Listen to some of the new songs and watch the project video.

There’s lots to enjoy and cool rewards for every pledge.

March 11th is the deadline and I would appreciate your support!

Thank you to everyone who supported my Kickstarter project. We tipped on March 7th and are now officially over the top!

The names of all those who supported me during the Kickstarter campaign are posted in the News & Notes section of the website.

Stay tuned for more updates as I continue to work on the album.

A big thank you goes out to music journalist, Neil Tesser, for including me and my Kickstarter initiative in his March 5, 2012 article for the on-line news journal, the Examiner! He featured three projects, and here’s what he said about mine:

“You have a little more time – almost a week! – to top off Chicago vocalist Linda Tate’s crowd-funding drive. She needs less than $500 to meet her goal for producing her next album, entitled Geography – the fourth under her name, but the first made up entirely of her own compositions (several of which are available for streaming here).
Tate sings in a light, clear contralto, with a gentle but sure swing, and in the course of her career she has developed a confident, playful style. Her penchant for smart lyric-reading has grown, too, but she sheathes it in clean, unfussy phrasing, which allows the occasional sharp insight to emerge as a surprise – and all the more welcome because of it. This time, though, the lyrics are her own, and you can hear the way she’s tailored them to her own approach.

Geography ought to create some buzz in jazz circles. Tate’s backing band for the disc – which she plans to release sometime this summer – features Curtis Robinson (guitar and vocals), Steve Eisen (saxes and flute), Marlene Rosenberg (bass), and Ernie Adams (drums). For those unfamiliar with those names, they make up a neat little list of Chicago all-stars; the band is worth supporting all on its own. Tate’s artistic evolution puts it over the top.”

The recording sessions for Geography have been at Studiomedia Recording Company in Evanston, Illinois. Recording enginer, Scott Steinman, has been instrumental in capturing the sounds you will hear on the new album. Here is what he has to say about the my project.

“Linda is a terrific, talented singer. Proof is available on her previous Southport Records CD releases. Recording with her is a pleasure because she has a rich, clear voice. Her sound is real and easy to record with any microphone. They all sound good on her (of course, we picked a favorite).

Oh, but Linda’s artistry goes beyond her excellent vocal ability. Here on her current project, Geography, she also showcases herself as a songwriter. And Linda is quite good at it. She writes music and lyrics playfully and with vision. The songs are fully realized, interesting pieces, and each has a distinct personality. She writes with clear purpose and is obviously having a great time doing it. It’s evident in the studio that her music inspires the players to be inventive, nothing “phoned in” here. Regarding the players, Linda brings in top-tier musicians to render her songs. She works with some of the best around. Exercising excellent taste and casting musicians to her songs makes Linda a fine producer as well!

Terrific singer, excellent songwriting, great players, and tasteful production are the right elements for a successful, compelling album. I’m honored to be involved with the record. It’s also fun hanging out. Thanks, Linda, for including me, and mostly for your talent.

Best wishes in anticipation of the Geography release!”